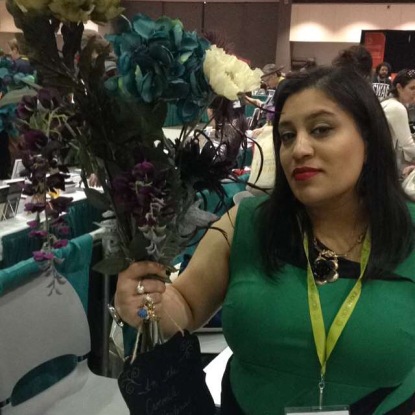 Saba Syed Razvi is the author of In the Crocodile Gardens (Agape Editions), heliophobia (Finishing Line Press) Limerence & Lux (Chax Press), Of the Divining and the Dead (Finishing Line Press), Beside the Muezzin’s Call & Beyond the Harem’s Veil (Finishing Line Press). Her poems have appeared in journals such as The Offending Adam, Diner, TheTHE Poetry Blog’s Infoxicated Corner, The Homestead Review, NonBinary Review, 10×3 plus, 13th Warrior Review, The Arbor Vitae Review, and Arsenic Lobster, and others, as well as in anthologies such as Voices of Resistance: Muslim Women on War Faith and Sexuality, The Loudest Voice Anthology, The Liddell Book of Poetry, Political Punch: Contemporary Poems on the Politics of Identity, The Rhysling Anthology, Dreamspinning, and Carrying the Branch: Poets in Search of Peace. Her poems have been nominated for the Elgin Award, the Bettering American Poetry Awards, The Best of the Net Award, the Rhysling Award, and have won a 2015 Independent Best American Poetry Award. She is currently an Assistant Professor of English and Creative Writing at the University of Houston in Victoria, TX, where in addition to working on scholarly research on interfaces between Science and contemporary Poetry, she is researching Sufi Poetry in translation, and writing new poems and fiction. She’s available for readings, guest lectures in person or by videoconference, visits to book clubs, individual consultations or commissions, workshops, and various collaborations.

How do you say your name? Listen to this song by the band Mephiskapheles called “Saba” at about 1:53 minutes and you can hear what my name sounds like. And, no, I don’t know the band, nor am I the person the song is about — however, it’s cool to be able to hear my name in a song, anyway!

Note that there are authors named “Sabaa Tahir” and “Saba Syed”, and that I am neither of those authors! Since I don’t know them, I can’t answer questions about them for you; sorry.

Where are you from? I’m from Texas, but I love to travel around the world when I can.